HISTORY OF THE FOOTBALL PLAYER STATUE

The 20-foot-high steel-reinforced concrete statue had been standing just west of Hilltopper Stadium since 1968, when the stadium was the home field for Seacrest High School.

The school became Atlantic High School when Seacrest merged with Carver High School — one of the first black high schools in Palm Beach County — in 1971. Atlantic combined Seacrest's green and white school colors with Carver's eagle mascot, and the school remained at the Seacrest location until 2005, when the new Atlantic Community High School opened on West Atlantic Avenue.

Local artist Don Seiler created the statue based on a photograph of New York Giants quarterback Y.A. Tittle. Tittle never played football in Delray Beach, but his nickname was the Bald Eagle, lending a bit of significance to his presence at the school with an eagle mascot.

Seiler had wanted the statue to go to the Orange Bowl, but a friend suggested donating the statue to “a lovely little high school with a great football team,” and the Seacrest High School class of 1969 contributed the funds to move the statue to the school.

The first attempt to move the statue was not successful, as documented in The Palm Beach Post on Nov 27, 1968. 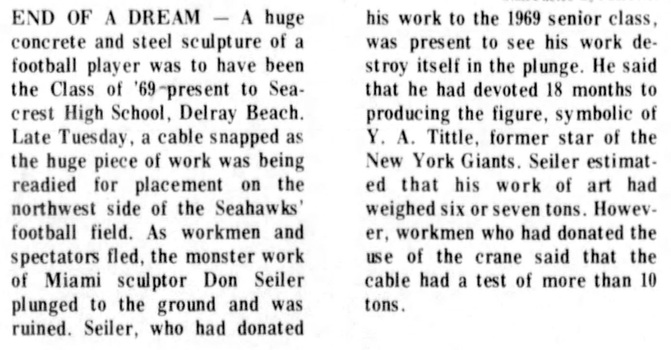 ​The statue was repaired within a couple of weeks, and officially dedicated on Dec. 19, 1968.

In 2003, not everyone agreed that the statue should move to Atlantic High School's new location on West Atlantic Avenue. 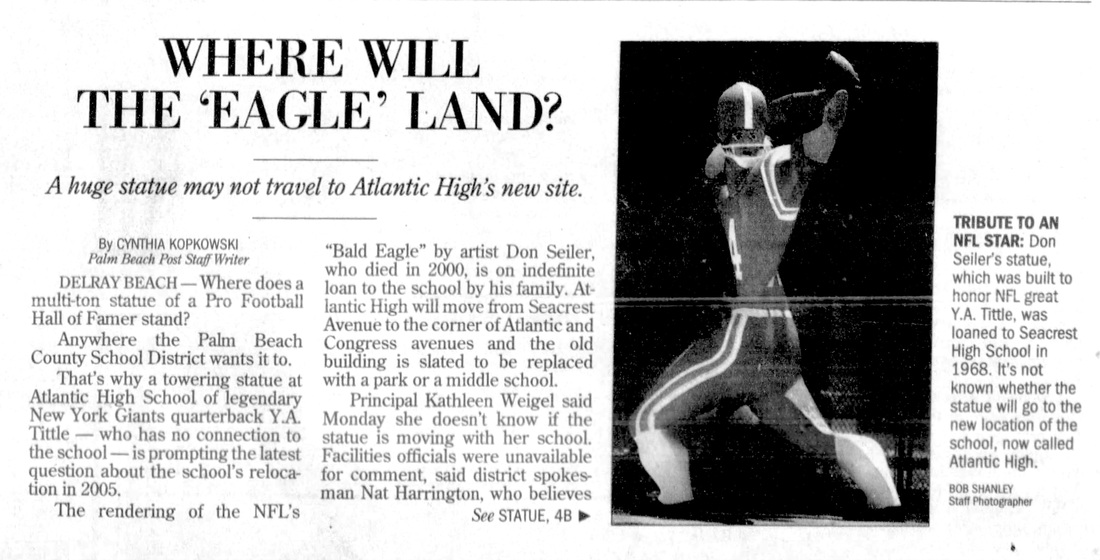 The statue in May 2016, being prepared for a move to Atlantic Community High School's West Atlantic Avenue location. 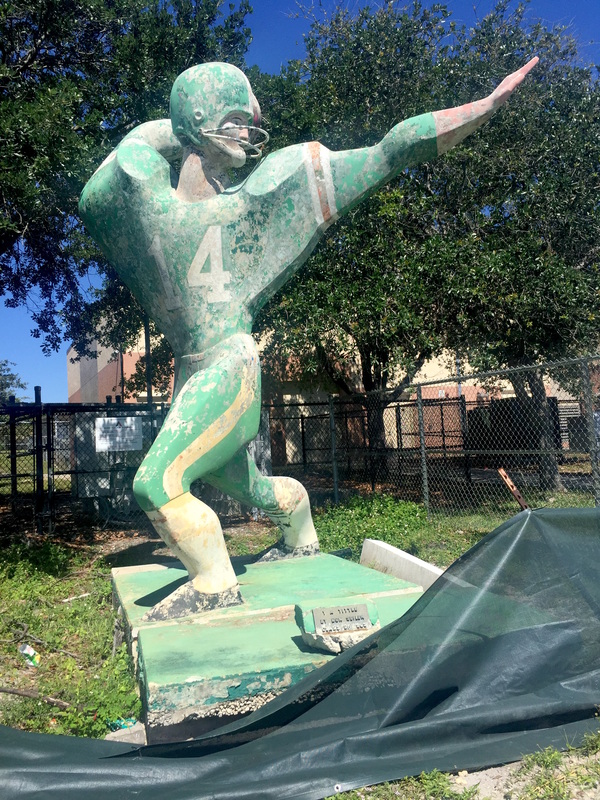 On August 2, 2016, the crated statue was moved to the Atlantic Community High School campus. Delray Beach contractor Chuck Halberg donated time and money to relocate the statue. Halberg’s eldest son played football at the old campus on Seacrest Boulevard, and his youngest son attended Atlantic at the new campus. 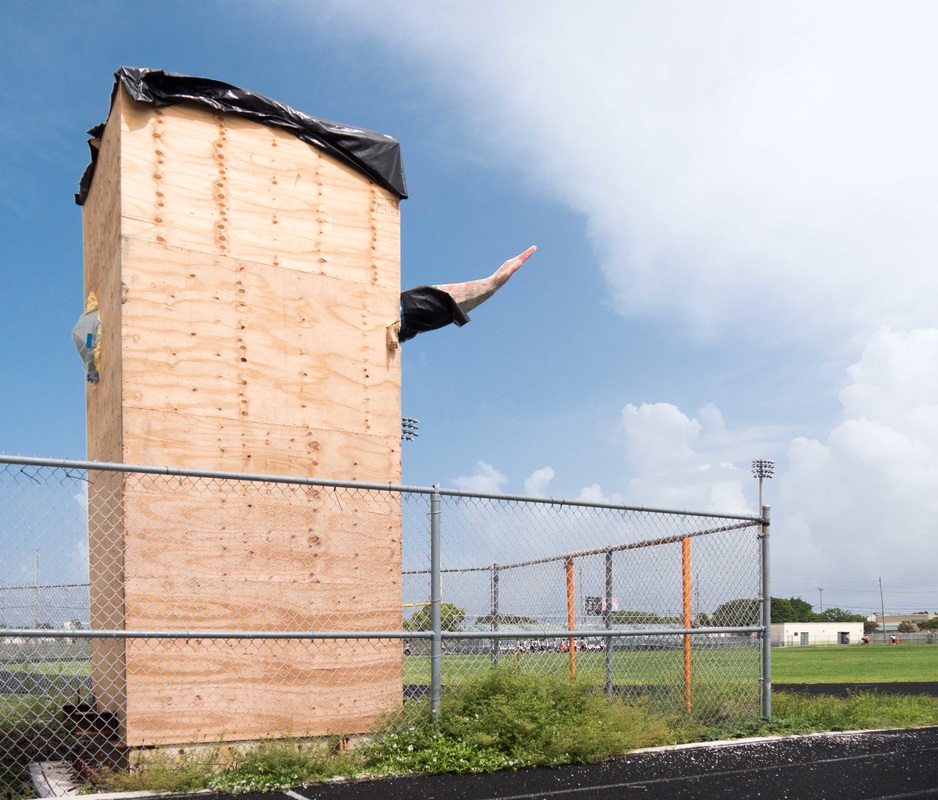 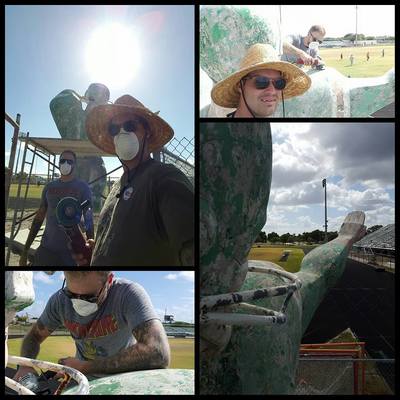 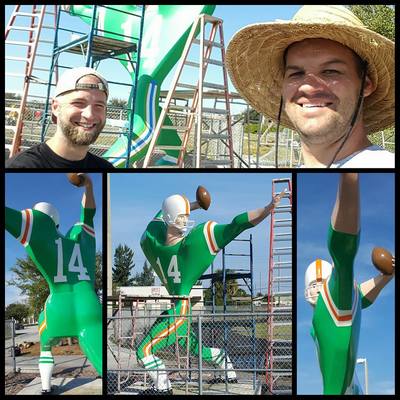 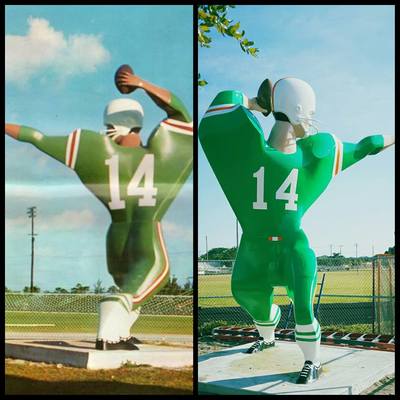 ​The official unveiling of the statue is at the Wednesday, May 17, spring football game. Kickoff is at 7 pm.